Ann Marie’s mother vacillated between chronic dieting and binge eating-and still does. “From early on I was made to feel ‘less than’ my slim siblings. My mother called me ‘pushy and bossy’ and said that I just had to get out first ahead of my twin brother at birth.” Tragically, her twin brother was “born blue,” and has had serious issues that have adversely affected his life. Although she knew it wasn’t her fault, Ann Marie felt she shouldn’t stand out more than her brother so he wouldn’t “feel bad.”

While there were many events that skewed Ann Marie’s beliefs about herself, three stand out to her as pivotal in the development of her eating disorder. 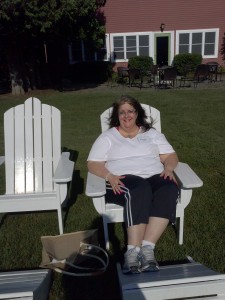 “My mother implied that I was overweight, but looking back at family photos, it wasn’t true. When I was eight, she took me to my first Weight Watchers’ meeting. Over the years, we stopped and started depending on how my mom was doing.” Each time they stopped, the shame  grew and both began eating in secret. Ann Marie says that as an adult, she continued that pattern, “thinking nothing of stopping off for fast food on the way home from a Weight Watchers meeting.”

Then one day, her father, whom she loved and respected immensely, angrily yelled at her as she ran down the stairs: “You sound like a cow!” She says can still feel the pain of that comment today.

These two experiences led to tremendous shame, loneliness, and feeling different from her siblings and peers. At 13, Ann Marie got her first job delivering newspapers. After her route she routinely stopped at the local drug store to buy her “stash” of Doritos®, Combos®, Swedish Fish®, and strawberry soda. She would consume this “dinner” while hiding in her bedroom reading. She said, “It comforted me, made me feel secure, and ultimately became my escape from life.”

The third event occurred when Ann Marie was 18. In order to get out of her house, she (along with her sister and a friend) signed up to join the US Air Force. “The recruiter thought we were all silly young girls who weren’t serious about enlisting. I wanted to go so badly that in order to attain the stringent weight requirement of 156 pounds, I began dieting and working out in a very unhealthy way.” She lost about 60 pounds while she was on delayed enlistment and was initially sworn in with a 6-month waiting period to ship out. When the day finally came to leave, Ann Marie weighed in at 158 pounds, two pounds over the weight limit. The Air Force refused to take her, and told her to go home.

Ann Marie was devastated and says she gave up on life. She eventually moved out of her family home, but the distress went on for years.

She began a long pattern of losing and regaining weight. She discovered that she enjoyed walking, which made her feel stronger and better, but continued to yo-yo diet.

In 1998, at 34 years old, Ann Marie thought she was getting it all together. She had a great job in New York City, purchased a condo of her own, and had the fun, peaceful single life she’d always wanted. But because of her crazy schedule, she said, “My life became a mundane existence. I would come home exhausted after a 1 hour and 45 minute commute on two trains, hit the couch, and start eating. Once I started, I was unable to stop: first something sweet, then something salty, then back to sweet, and so on. Chips, candy, soda, whatever I was in the mood for. I was back to my childhood pattern and it scared me to death. I couldn’t understand why I continued to struggle with this part of my life.” 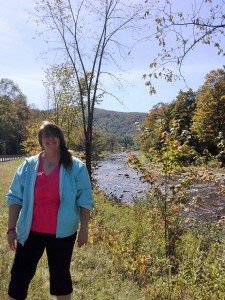 Later that year, Ann Marie experienced a severe gastrointestinal infection that caused severe nausea and vomiting for weeks. The side effect was a 25 pound weight loss. When she was finally able to return to work, a co-worker commented, “Ann Marie you look stunning!” Having never heard that before, she was thrilled but says that was the beginning of her struggle with bulimia for the next 13 years.

In 1999, Ann Marie transferred to California and began her “single girl adventure.” All the while, she struggled to work out, eat restrictively, and deal with the heavy burden of her eating disorder. She met and married her husband, Jason, in 2001 and they moved to Arizona in 2002. As they became more comfortable with each other, they began overeating together, and together they gained a lot of weight.

Finally at a breaking point in 2003, Ann Marie began treatment at a nearby eating disorder treatment center. Through that, Ann Marie says she gained a wealth of coping skills and was introduced to mindfulness.

However, in 2009, she was diagnosed with type 2 diabetes and she experienced what she calls her “pit of despair.” She lived for more than a year in denial about her disease, eating anything she wanted and gaining weight again. “I felt utterly defeated and bingeing became a nightly event. I knew I had to do something to stop my downward spiral.”

Her husband, a massage therapist, worked at a spa with Michelle May’s husband Owen, a professional chef. They came to a book signing for Michelle’s new book, Eat What You Love, Love What You Eat. She attended her first Am I Hungry? workshop in 2010, and after just a few weeks of cautious optimism, she was ecstatic with the simplicity and freedom she experienced. After her first 8-week workshop, Ann Marie convinced Jason that this was what they both needed in their lives and he joined her for her second 8-week workshop.

In July of 2013, Ann Marie decided to participate in a 2-week mindful eating retreat in Vermont. The comprehensive program and curriculum included mindful eating, binge eating therapy groups, fitness classes, and mindful meals. Her enthusiasm was contagious so the staff at the center offered her the opportunity to stay on as an Ambassador (a staff/participant) to assist the participants in their own journey. Ann Marie spent the next seven weeks mentoring others dealing with eating issues as well as learning to take care of herself. “It was life-changing,” she said, “and led me to contact Am I Hungry®? to inquire about a job. Unbelievably, my journey came full circle and I am now Michelle May’s administrative assistant! Now, working for Am I Hungry?, I am surrounded by the concepts of mindfulness  each and every day and get to play a part in helping others discover how mindful eating can help them too!”

As part of Ann Marie’s initial training, she participated in the fall 2013 Mindful Eating for Binge Eating Retreat in Carefree, Arizona. “I saw people’s lives change! They may have felt nervous and unsure about what to expect, but after five days with Michelle May and Kari Anderson (authors of Eat What You Love, Love What You Eat for Binge Eating), they discovered freedom, hope, lifelong friends, and the tools to end their battle with binge eating disorder.”

In January 2014, Ann Marie participated in an 8-week Am I Hungry? Mindful Eating Webinar and said, “That’s when I realized that I eat mindfully and instinctively now. Unlike dieting, this program gets easier and more natural as time goes by, so don’t give up!”

Always the encourager, Ann Marie added, “For anyone wanting to change their relationship with food, know there is hope. If I can do it, you can too. I’m not perfect, but to quote Michelle, ‘Perfection’s not possible, and fortunately, it’s not necessary.'”