Jeff’s Story: Bariatric Surgery and Am I Hungry?

At 643 pounds, Jeff Butts felt he was running out of options.

Jeff’s problems began twenty years earlier when he moved to a new job in a new state, away from his friends and family. He developed the habit of eating when he was bored, lonely, mad, or celebrating. The heavier he got, the harder it was to move – and the heavier he got. He was caught in a vicious cycle.

He tried everything. He’d been on Medifast, Weight Watchers (“of course”), a hospital-based program of meal replacements, SlimFast, and others. “I’d start out really good and really motivated then I’d fall off the wagon. I’d feel like I’d blown it so I’d just give up.” He also considered bariatric surgery but was afraid of complications and as he explains, “I knew I couldn’t stick to the rigid diet.”

His life became more limited. “I was getting to work but that was about it. I was using a walker and had hand controls in my vehicle because I couldn’t move my foot from the accelerator to the brake.”

Finding a Way There

His mother participated in an Am I Hungry?® Mindful Eating Workshop in Ohio and called him right away. “She said, ‘Jeff, you’ve got to find one of these workshops!'” He did. Luckily there was an Am I Hungry? Facilitator, Lori Hurst, M.D., near his home. He signed up but didn’t go. “It was the middle of winter and I was afraid I’d fall on the snow and ice. I had fallen once in my home and it had taken me three hours to get myself up.” 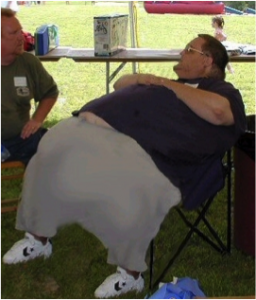 The final straw was his online search for a power scooter. “They don’t make one that was large enough for me that could fit through a door.” He had an epiphany. “I had to change or else.”

He ran into an old friend who had had bariatric surgery. She invited him to a picnic with the WLS Indy Support group. After talking to a lot people, he made the decision to undergo gastric bypass surgery.

However, he knew that his fundamental problem wasn’t the size of his stomach, but his relationship with food. He signed up for another Am I Hungry? Mindful Eating Workshop prior to surgery. “Before that, I always thought I had to do this on my own.” By the time the workshop was over, he felt “mentally ready.”

However, six months after surgery the cravings returned. This time he asked for help right away and met with a dietetian and psychologist who helped him address the underlying issues. He also used journaling and positive affirmations. 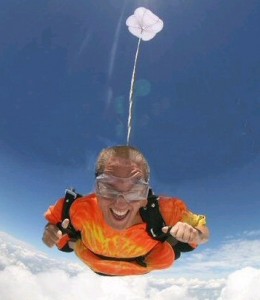 He signed up for another Am I Hungry? workshop to make his success stick. “I really lived it. I did the work. I read the chapters before and after class, and used my workbook and journal regularly.” He continued to gain his life back.

He shares some of the most important things he’s learned with Am I Hungry?

He attributes his tremendous success to the combination of bariatric surgery and changing his longstanding thought patterns.

Jeff has hit many major milestones and celebrated each one: 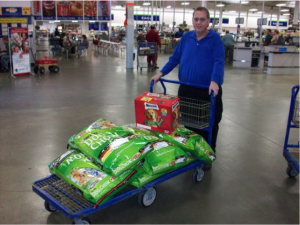 Perhaps Jeff’s greatest life change has been discovering his purpose. When he lost his job last year due to the economy, he took a step back to decide what he really wanted to do. He decided to share his hard-won life lessons with others who struggle with food. He became an Am I Hungry? Facilitator, a bariatric surgery support group leader, and soon, a certified wellness coach.

Jeff has given new meaning to “life changing”!