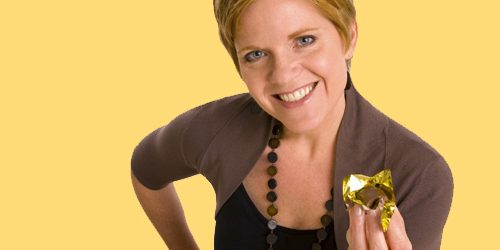 This is an excerpt from Eat What You Love, Love What You Eat: A Mindful Eating Program to Break Your Eat-Repent-Repeat Cycle. Download chapter one free.

Picture a girl with red hair, lots of freckles-and chubby. My parents didn’t have a lot of money, so we didn’t waste food; besides, there were starving children in Africa. My athletic, skinny younger brother could, and would, eat anything that wasn’t nailed down, so I made sure to get my share first. My grandmothers were both wonderful cooks, and I learned early on that food was love. My mother, on the other hand, was slender and dieted to stay that way. She was the only one in our family who never ate her baked potato. I believed that when I grew up, I wouldn’t get to eat potatoes anymore either.

When my parents began having marital problems, I found comfort and security in eating. Soon after they divorced, a girl at my new dance school teased me about being fat, so I quit taking lessons and gained more weight. Through my teens I spent most of my free time hanging around with my friends at a fast food joint or eating in front of the TV set. I still remember how embarrassed and guilty I felt when my stepdad realized that my friend and I had eaten a whole package of cookies-thirty-six to be exact.

I always put a lot of pressure on myself and then used food to relieve the stress. It usually worked-at least for a little while. In the long run, though, my main coping mechanism itself became a major source of stress for me. I was trapped in a vicious cycle.

Subtle and not-so-subtle comments and upsetting shopping trips to find clothes made it clear I had to do something. The stage was set. For the next twenty-plus years, I was on one diet after another. I had my favorite: the one that worked-as long as I stuck to it. I tried to be good, but I always ended up cheating. I discovered that exercise helped, but I used it mostly as a way of paying penance when I was bad. I was ashamed of my body, ashamed of my eating, and ashamed of my cheating. I developed features of an eating disorder that helped me cope with my painful relationship with food. Without realizing it, I was caught in another vicious cycle.

Ironically, despite the fact that I wasn’t able to stick to a diet, I successfully finished college, medical school, and a family medicine residency. I eventually found myself in the position of advising my patients to follow a diet. Most of them didn’t seem to fare any better than I had. That was little consolation.

I felt discouraged and helpless. How could I tell someone to do something I hadn’t been able to do myself? I knew it was time to try again, but it didn’t seem fair; my husband and children never dieted, and they never struggled with their weight. In fact, they ate whatever they wanted, but they rarely ate more than they needed.

Did they just have a better metabolism? That was probably part of it. I knew mine was a mess after years of overeating and dieting. Did they have more willpower? No. I doubt they could follow a diet for very long either. But there was something else, something fundamentally different about the way they thought about food. In fact, they didn’t really think about food at all-unless they were hungry.

Could the answer really be that obvious? Could I learn to listen to my own body’s wisdom again to guide my eating? My little voice said, “I can’t stand the thought of another diet. I’ll try anything else.”

It was surprisingly simple, but it was not always easy. After years of trying to follow other people’s rules about food, ignoring hunger, and eating for all sorts of other reasons, it was difficult to trust my body and my instincts. Gradually, I developed a more mindful, satisfying way to eat and move my body.

Something else completely unexpected happened along the way. I discovered parts of myself I had lost-or didn’t even know existed. I found peace, health, and wholeness. I also discovered a purpose for my life and a passion for helping others find wholeness too.