Whatever happened to the Pumpkin Pie Lady?

It was just before Thanksgiving 2008 and I felt nervous yet excited. I was attending an all-day nutrition class required by my bariatric center – the last step I needed to complete before my gastric bypass on November 10th. I came loaded for bear so to speak. I brought notebooks, extra pencils, and my sister and my mom to take notes so I could concentrate. We got there early to sit in the front row. Heck! I wasn’t this prepared to take my SATs before college! 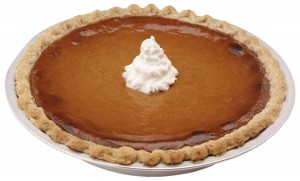 After covering all of the “what to expect after bariatric surgery” information, we got to the toughest part in my mind…the MEAL PLAN! (Insert sound effect: DUN DUN DUN DUNNNNNNN!) I felt that I was as prepared as I could be. I had researched and read lots of information about bariatric surgery and spoke to any and every bariatric surgery recipient I could find. And now I’d learn what I should eat for the next 18 months of my life.

Then came a question from the back of the room. “Can I have pumpkin pie at Thanksgiving?” We were just getting started but everyone in the room knew that pumpkin pie should not be on any of our plates this year since we’d be just weeks post-op.

Keep in mind, this was many years before the Am I Hungry? Mindful Eating for Bariatric Surgery Program existed. Even then I believed in the “All Foods Fit” approach but I knew in those first few months I needed to take care of my new pouch to avoid having problems. But Pumpkin Pie Lady was not to be denied. After all, as she explained, “Her life wasn’t worth living if she couldn’t have pumpkin pie at Thanksgiving!”

The dietitian and surgical nurse were as nice as they could be but let her know in no uncertain terms that, “No, she could not have pumpkin pie this year.” We moved on to post-surgery and how long we’d have to wear the TED hose, when from the back, came the same pie question, slightly re-worded. Answer: “No, it is not ok to just leave off the Cool Whip.” Moving on to discuss the Lovenox shots then another pie question. Answer: “No, it would not be alright to just eat the pumpkin filling and leave the crust.”

Clearly, Pumpkin Pie Lady was not ready for bariatric surgery. She could not get past the fact that she couldn’t have pumpkin pie this year. I get it! The holidays can be a difficult endless parade of favorite foods. But I don’t think she yet realized that having bariatric surgery would require both short and long term changes – and that it really wasn’t about the food anyway.

My first post-op Thanksgiving was less than three weeks later. I went to Ohio to have Thanksgiving dinner with my family, and again, I was loaded for bear. This time I had one ounce of applesauce, two ounces of refried beans, my own special small plate, small ramekins, and a baby spoon. I got up often during the meal to fill other’s water glasses to take a break and help make my meal last 30 minutes. This got me up and moving and talking to people; after all, the holidays are really about family, not food.

Of course, I can enjoy pumpkin pie now, but I honestly didn’t feel like I missed anything that first year. Through the years I’ve run into lots of people who were in that nutrition class and we’ve all done amazingly well. We often wonder though, “Whatever happened to the Pumpkin Pie Lady?”