Restrictive diets don’t work after WLS any better than they worked before! As I’ve connected with people who have had WLS (bariatric surgery) who are typically a year or more out and who feel they are struggling to manage their eating, I hear some common themes:

As I explored in this video, if you are struggling with food after bariatric surgery, you may be experiencing fear, frustration, and confusion. You might also be feeling shame and self-blame that you are stuck again.

But it is not your fault!

The truth is, dietary restrictive diets didn’t work for you before you had WLS. If it did, would you have had it? And it doesn’t work after!

That may be difficult to accept, given our diet- and weight-obsessed culture, and the constant messages about what you are doing wrong that makes you and your body wrong.

Has it occurred to you that what you’ve been told should work simply doesn’t work? There is a lot of proof it doesn’t!

Once you realize there is a different way…

Even though it feels like you have tried everything, I promise, there is another way! 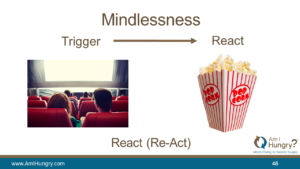 Mindful eating (at least the way we teach it at Am I Hungry?) is all about learning how to notice the beliefs, thoughts, and feelings that have been driving your unconscious patterns. Once you become aware of them, you are able to learn new beliefs and thoughts that create new feelings and patterns!

Wait, that sounds a little woo-woo…

It’s not! It is simply about learning to pause between the trigger and your automatic reactions, so you have the ability to respond instead. 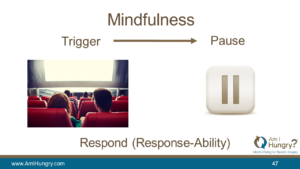 An example I often use is craving popcorn at the movies. (I explained it in the free video you can watch here.)

What this means is that instead of trying to “control yourself” around ______ (fill in the blank with a favorite food), then feeling “out of control” because you were “bad,” you learn how to be “in charge” of making decisions that work for you.

Instead of trying to follow the “expert’s” rules (even after bariatric surgery), this is an inside-out approach!

Simple, but not easy! 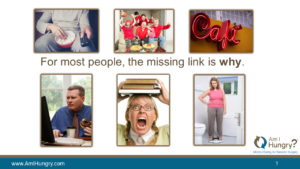 Over the last twenty years, we’ve taught tens of thousands of people how to use the Mindful Eating Cycle to make decisions that don’t require restriction, deprivation, or guilt (including people who have had bariatric surgery!).

I explained the Mindful Eating Cycle in this video – you can watch it here.

The problem is, it sounds deceptively simple, so one of three things can happen:

There is a fourth option:

And I believe you can!

The results are nothing short of mind-blowing!

Jenn, who found mindful eating after her gastric sleeve, it was “the emotional attachment that I had made to food, not my lack of self-discipline or lack of knowledge about nutrition that was really causing the stumbling block for me. I just don’t think I had the right tools to understand myself.” She said she realized that “I didn’t just need to change what I eat, but I needed to change what I think about what I eat.”

Listen to the rest of Jenn’s story here.

Diets don’t work after WLS. After everything you’ve been through, don’t you owe it to yourself to see if you can learn how to manage your eating from the inside out?

Enjoyed this article? Here are three more you’ll like:

When the honeymoon after weight loss surgery is over

PrevPreviousSymptoms of maladaptive eating after bariatric surgery
NextShould I eat breakfast if I’m not hungry?Next