Stephanie’s Story: Back to the Future

Stephanie describes herself as “painfully thin” in childhood. Her family ate “three square meals” a day and she played outside but there was no conversation about healthy lifestyle behaviors. As an adult, people often commented about the fact that she could eat whatever she wanted but she admits that she wasn’t really concerned about nutrition.

She got married right out of high school and had four children. She gained 50 pounds with each of her pregnancies then went right back to her normal weight without any effort. She had an active job working in a warehouse but she didn’t exercise. When she got divorced, she lost a lot of weight from all the stress of being a single parent.

In early thirties, she met someone who loved food and she started eating a lot more. She switched to an office job that was very stressful and sedentary. At work she ate peanut M&Ms out of the vending machine and meals from McDonalds. She’d come home at the end of the day feeling anxious and would eat right out of the cabinet, though she continued to prepare meals for her children. “Over four years, I went from a size 4 to a size 18 but I just kept buying bigger clothes.

She wasn’t feeling well but she initially ignored it. Out of the blue her parents called and insisted that she go to the doctor. The doctor diagnosed a precancerous condition that was in the critical stages of forming into something more serious. Fortunately, it was caught in time, treated quickly and cured. However the doctor also told her she was overweight. “It dawned on me that I had been taking care of my kids but not myself.”

She ordered an exercise DVD and did it twice but then put it on the shelf. “I was so discouraged and I felt hopeless because I couldn’t afford a personal trainer. Then I read an inspiring story on Facebook so I reached out to this woman. She encouraged me and helped me establish an exercise program I could live with. I cut my portions in half and started drinking water. I felt so much better, not only physically, but mentally. I wanted to share this new found part of me with everyone! I became a group fitness instructor and a personal trainer to help others who were struggling with similar issues.” 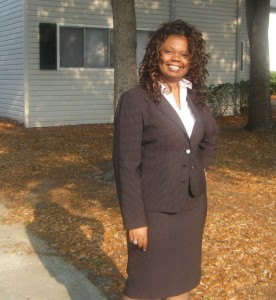 Stephanie works at Florida Blue formerly known as Blue Cross Blue Shield of Florida. A few years ago they offered a new course called Am I Hungry?® Stephanie said, “Up until I took that class, all I was seeing when I opened the fridge was numbers (calories), not food.”

“What attracted me to Am I Hungry? is that it is simple and realistic, not a quick fix. It’s not about fitting into a wedding dress—then going right back to where you were! I wanted to go back to the way I was when I was a kid, when food was food.” Other things that Stephanie has learned from Am I Hungry? include:

Stephanie also completed Am I Hungry? Mindful Eating Program facilitator training and is pursuing her Bachelors in Health Education. She recently started her own business, Fit Buddy, to help people through motivation and accountability. “You have no idea how much Am I Hungry? has influenced me to help people manage their eating without weighing and measuring their food!”

Stephanie added, “People know that I am passionate about wellness. When I walk up, they’ll hide their hamburger—but I tell them that I wouldn’t want to live my life without hamburgers! Health is for everybody! It’s just a matter of finding what works for you.”