Nicole’s Story: Recovery from Binge Eating Disorder – “I deserve it!” 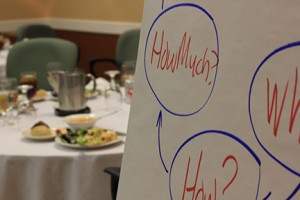 Nicole attended the Am I Hungry? Mindful Eating for Emotional Eating and Binge Eating Retreat in Arizona eight months before this interview. In this honest and moving conversation, we hear Nicole describe how, after thirty years of bingeing everyday, sometimes several times a day, she is now living a bigger life than she ever thought possible!

Listen to the inspiring 30 minute conversation between Nicole and Dr. Michelle May, founder of Am I Hungry? Mindful Eating Programs and Training.

Like many people we’ve worked with, Nicole has been successful in many areas of her life but says, “I couldn’t figure out why I couldn’t fix this.” As you’ll hear in this conversation, Nicole began bingeing to cope with childhood abuse, then continued to use food to deal with stress. “I was terrified to give it up.”

“I knew there was a problem and I knew why.” She read Eat What You Love, Love What You Eat for Binge Eating, and saw exactly what was happening, and felt she needed to do something. “I wanted to stop thinking about food 24 hours a day, seven days a week and obsessing over it and eating ridiculous amounts of food to the point that I felt ill.” She decided to completely immerse herself in the retreat because she wanted to heal and recover from binge eating disorder.

For Nicole, the biggest shift while participating in the retreat was realizing that she was saying things to herself that she would never say to another person: “I am being so abusive to myself. I am continuing the abuse I incurred as a child. That was like a switch…I do deserve to be nice to me so I started the process of accepting myself the way I was.”

“I kinda deserve it!”

She learned to nurture and listen to her self-care voice that encourages her when she starts to feel afraid. “It’ll be ok self! One step at a time here!” She has learned self-compassion and how to be gentle with herself: “I kinda deserve it!” She is more aware of her emotions now, more aware of her body and how it feels, and more aware when she is getting tense and stressed out.

At the retreat Nicole says she discovered that people were nice, compassionate, and kind, and began to think that maybe “other people would be too.” Since the retreat, she has created more relationships in her life and has been more open. “I started filling up my life with people.”

With recovery from binge eating disorder, Nicole has created space for her big life. “I would like to get married again. It’s hard to be emotionally intimate with someone when you’re really having an emotionally intimate relationship with your food, and you really don’t understand yourself and you don’t like yourself.”

“I wanted to believe there was help out there for the binge eating, but there was a part of me that thought, ‘I’m stuck with this for life.'” That has all changed. “I’m doing better with eating than I ever thought I would. I enjoy my food. I’m not just inhaling it…I did not think I would feel so healthy about food as I do right now; I did not think that was possible.”

“I think that people can heal.”