Jenn’s Story: Learning to love herself

At 35 years old, Jenn says she has 35 years of habits before she found mindful eating after her gastric sleeve. For Jenn, it was “the emotional attachment that I had made to food, not my lack of self-discipline or lack of knowledge about nutrition that was really causing the stumbling block for me. I just don’t think I had the right tools to understand myself.”

Listen as Jenn shares her remarkable journey from focusing on her failures to believing in herself in this interview about mindful eating after gastric sleeve with Dr. Michelle May, founder of Am I Hungry? Mindful Eating Programs and Training.

Like many people we work with, Jenn had tried numerous diets (“you name it, I’d tried it”), resulting in weight cycling. But she didn’t stop there. “I had weight loss surgery—gastric sleeve—before I met you, but I wish that I had sat down and dealt with the heart of what was causing my pain. Surgery is a fine tool and I don’t regret it, but in order to keep those results, I needed to figure out the ‘why.’ Rather than relying on some exterior force, what could I do internally, to grow and learn about myself personally?” 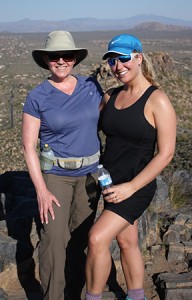 While reading Eat What You Love, Love What You Eat for Binge Eating, Jenn had the feeling that someone had been looking over her shoulder. “I even threw the book across the room a couple of times.” She decided to participate in our Mindful Eating for Binge Eating Retreat, initially not for herself, but to help her mother who has also had bariatric surgery.

She read all the retreat materials but says, “I’m a bit of a cynic myself and I didn’t really believe everything that was written there.” She figured that if she didn’t fit in, she’d at least get a nice vacation out of it! In fact, like many people who come to retreat, Jenn hadn’t even told people where she was going! “But when I got there, I was pleasantly surprised by real people, who had real problems, and were real about them. In the process of looking for answers for others, it changed my life, it changed my heart, it changed how I view people, how I view myself, it changed my self-talk. I really just needed to love myself before I could love other people.”

Bariatric surgery is tool but it “doesn’t fix your head”

There were five people at this particular Mindful Eating for Binge Eating Retreat who had had bariatric surgery. That didn’t surprise Jenn who said, “It doesn’t fix your head.” She knows it takes more than “to expect surgery on your stomach to change your actions or reactions to food.”

One of Jenn’s key lessons was recognizing that, “I’ve always been so mean to myself.” She has learned to stop trying to be something she’s not and has learned to accept herself.

Jenn said that another big change for her was that, “I had to get comfortable with vulnerability… For the first time in my life, I allowed people to know who I really was, and they loved me anyway.” That was huge for her. “I began a journey of believing in myself…” Since returning home, she has continued to build closer relationships with friends and family. Jenn also participated in Am I Hungry? Mindful Eating Training to share what she has learned with her clients.

Her final words to somebody who’s been on the fence about attending a retreat or taking that next step: “You’re not alone. And if you can’t love yourself right now, that’s ok. Come anyway. People will love you, and when they do, they’ll teach you how to love yourself.”