Gretchen’s Story: A Weight Off Her Shoulders

Gretchen first became preoccupied with how she looked when she was 13 and experiencing changes in her body. “I worried that I wasn’t thin enough or good enough. I remember saving my babysitting money to buy Dexitrim from the corner drugstore.”

In high school, Gretchen didn’t eat much during the week, then binged on the weekends. In college and medical school, she began to weight cycle.

During her OB-GYN residency, after her first pregnancy, she went on Weight Watchers. She felt like it gave her the rules she needed to get back in control, though she continued to cycle up and down.

Gretchen explains, “I became obsessed with logging food and exercise. I’d go through my ‘I hate my body’ times. I was plagued by it. Slowly the other things I loved fell away. It felt tragic, but I didn’t know what else to do. I felt so sad, but I continued to log every bite.”

Gretchen went on to complete a fellowship in Gynecologic Oncology. “I was part of a team caring for a 26 year old patient with ovarian cancer. She had traveled from far away and was always accompanied by her parents or her husband. They were all scared, but determined. Each treatment left her weaker and the cancer continued to grow despite our best efforts. I saw her in clinic one week before she died peacefully at home. I was struck with how fragile and transient our lives are. This experience made me want to escape my obsession with food, as it had never been so clear to me how very short and beautiful our time on this earth is and the futility of being diet-focused.” 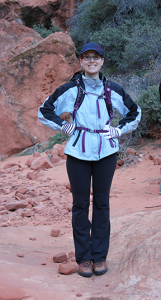 Gretchen saw a health coach in 2011. “I told her that I just couldn’t do this anymore. She recommended Eat What You Love, Love What You Eat.”

That was the beginning of Gretchen’s journey out. “I quit logging my food for a while but I was still going to Weight Watchers. I was still trapped in the diet mentality. I just had too many habits and distractions.”

When she finished her fellowship and became an attending, Gretchen decided it was time to go to a Mindful Eating Retreat. “I decided that this was important enough to leave work and my family for five days. I was completely committed to the process, but I was scared. What if nothing changed? What if I went back to the way I was? I was even terrified that I might not weigh enough to fit in.”

On the plane, Gretchen started a new journal. Here’s her entry.

“This journey begins – one that I have been dreaming about for years and planning for since October. Maybe waiting for since I was 13. I am very hopeful that this immersive week will help me to not only re-center, but also learn a new way to have a relationship with food. I feel so often tyrannized by food and its role in my life. Maybe I have no shot. Maybe I am going to need to spend the rest of my life recording everything I eat so that I don’t go off the rails, and maybe I will never really be happy with my size or weight. I know that without some intervention, there will be no endpoint. There has to be a better way.” 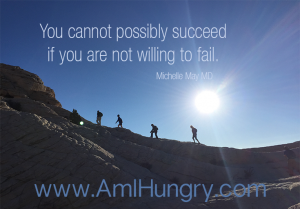 At first, Gretchen felt anxious before each mindful meal. “I pulled Michelle May aside during a break and told her that I was so afraid to fail, that I didn’t want to try. Michelle said, ‘You can’t possibly succeed without being willing to fail.’ That is my mantra now.”

“Those five days at the retreat changed my life. The retreat allowed me to synthesize and integrate all of the processes Dr. May teaches. I admit that when I first got back, I felt shaky, like I had just learned all of these great tools, but would I just forget them all? But as time passed, I’d think, ‘That’s so interesting! It has been another month, and I’m still not logging food.’”

Gretchen has noticed a lot of other big changes too.

But the biggest transformation has been getting her life back. Gretchen had been an avid knitter; in fact, she literally wrote a book on knitting! She also used to write poetry and prose and had written thousands of pages. She hadn’t knitted or written for a couple years.

“Before the retreat, I didn’t realize how much my life was consumed with thoughts of food, weight, and exercise. It took so much of my mental energy. When I stopped obsessing, I had so much time and energy that I was able to start knitting and writing again. I wrote a poem called Blue Eyeshadow (see below) that I entered into a contest. I just received a letter that I won first place so my poem will be included in the book, Poems in the Waiting Room!

Although I only weigh myself about once a week now, I am the exactly the same weight without logging a thing! The funny thing is that people keep saying that I’ve lost weight. I must look different now that the weight is off my shoulders.”

She has eyes of the clearest blue,
And above them
Her favorite makeup – bright blue eyeshadow
She wears it every day.
Even when she comes in for surgery
To remove a tumor
That has taken over her entire abdomen
She wears it to every chemotherapy treatment
Even when she is exhausted
Even when she is vomiting
Even when her hair has gone, leaving only a thin fuzz of wispy softness in its place.
She wears it when it becomes hard to walk
And a wheelchair moves her from place to place.
It makes her feel alive, the blue eyeshadow.
Put together.
Whole.

But today
Today she is wearing no eyeshadow.
Today she is in bed, and unable to leave it.
Comfortable
Emaciated
Minimally aware
Surrounded by many large windows,
Offering a view to the wintry bareness of the trees.
Soft-speaking physicians and nurses float in and out of her room.
We understand
That her final days are ahead of her,
And blue eyeshadow behind.
Her cheekbones protrude further,
Her eyes are sunken.
Those beautiful, crisp, light blue eyes.

She holds my hand,
Asks for a cool rag.
I squeeze her shoulder
It aches to let her go.
Another one of my beautiful, strong patients is dying
Leaving behind her a legacy
Of courage,
Of determination,
Of love.