Athan’s Story: How to Eat Like a Thin Person

Athan’s wife, a nurse, had been after him for years. Athan says, “She is a pencil-stick. I watched the way she ate but I didn’t understand it. I thought only thin people could eat like that, not the rest of the world.”

Athan, who is Greek, said, “Growing up, people were always sticking food in my face. I passed that on to my kids too.” (His children are ages 16, 14, and 12.) At the same time, he felt guilty about eating. “I remember that even as a kid, I hid foods I wasn’t supposed to eat, like M&Ms, under my bed or in my backpack.”

Impossible to Keep Up 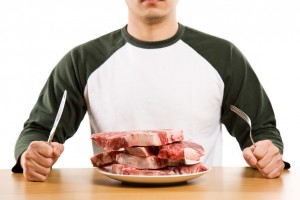 Athan works evenings in a sedentary job at a VA hospital call center where he deals with a lot of stress. He explained that his most recent diet was a program that required him to eat seven times a day and follow a rigorous work out regimen. He was taking four meals to eat during his shift in order to follow the diet schedule. “Even though I felt stuffed when I got home, I still felt like I needed more food because I was tired.”

That diet also worsened his guilt about eating certain foods. “I felt that if I ate carrot cake, I had to burn it off with extra exercise.” He was up to running an hour and a half six days a week and running a half marathon on the seventh day just to try to keep the weight off. “Even then, I was still eating way too much food for what I was burning.”

“My wife came home from a conference where she heard Dr. May speak. She was really excited and wanted me to read Eat What You Love, Love What You Eat.” Not wanting to waste his money or disappoint his wife, he first checked the book out of his local library. “I felt like Dr. May had been living in my house for the last 20 years.” After the second chapter, he ordered his own copy.

He also took the online Eating Cycle Assessment and scored high in both overeating and restrictive eating. “Before reading Eat What You Love, Love What You Eat, I thought I had only two choices: eating everything or being on a diet.” His perspective has changed drastically.

When his book arrived, he read it from cover to cover and started following the steps. “It was so easy but I wasn’t sure what to do next so I contacted Dr. May on Facebook. She suggested I reread the first eight chapters of the book one at a time and spend a week focusing on each topic like they do in the Am I Hungry?® Workshops,” (which the book is based on).

Athan’s first aha was “Why was I eating when I wasn’t hungry?” Athan says, “I realize now that I needed to learn to eat what my body needs rather than following a bunch of rules.” He estimates that he is eating about a third of what he used to eat. “Our grocery bill has dropped from $200-300 a week to around $70, all due to a decrease in the quantity of food. I am able to eat so much less without feeling like I am on a diet because I’m now aware of the uncomfortable feeling I have when I eat too much.”

He also says he is not only eating less but sleeping more. “Now, instead of eating when I’m tired after my shift, I just go to bed.”

Here are some of the other changes Athan has noticed:

He is also learning to handle his triggers for overeating, like fatigue, boredom, and occasional stress. He made a sign for his refrigerator: “If you’re not physically hungry, then what are you looking for?” He believes the sign is a good reminder for his kids too.

One of the most amazing changes according to Athan is that food has lost its power over him. “I’ve had a box of Russell Stover candy sitting 20 feet away for days. I can see it from here but I haven’t even opened it yet because I know it will still be there when I really want it.

“I read Eat What You Love, Love What You Eat while I’m at work. I’m trying to get my co-workers to read it too but most still seem to be looking for a diet,” Athan laments. “Weight Watchers and other diets spend a ton of money on advertising so people just don’t realize there is another way.”

Athan started at 232 pounds about three months ago. He is down to a more comfortable 199. “I want to get to 190 but what I love about this is that I can sustain it forever. I can have my cake and love it and live perfectly fine. Not just for this week or this month.”

Update: It has been two years since Athan was interviewed for this story. He has lost a total of 60 pounds and more importantly, feels great! Athan’s success story was even featured in Cooking Light’s The Food Lover’s Healthy Habits Cookbook!