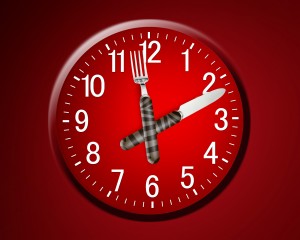 A former co-worker used to ask that question often, usually around noon but sometimes earlier if the day was dragging. At first I didn’t think much of it, apart from being amused, but about a year later, I started to think about when I ate. After that, his question made me realize something I hadn’t acknowledged.

Much of my eating was by the clock.

For instance, at work our “lunch hour” fell from 12 to 1, and so I felt like I should eat at noon. Except that some days I wasn’t hungry at noon. Sometimes I didn’t get hungry until a little later, but more often, I wanted to eat before noon, since I had breakfast at 5:30 or 6 a.m. However, even when I ate a mid-morning snack, I struggled not to nibble on something at noon.

I didn’t feel hungry, but it was “lunch o’clock.” Shouldn’t I be eating?

But this started long before work. During my first two years of high school, if I wanted lunch, I had to squeeze it in around 11, between band and chorus. This meant that I wanted a big snack when I got home at 3, but that didn’t stop me from having supper between 5:30 and 6 (when my mom got home from work but before my dad watched the 6 o’clock news). I didn’t need the food then, but it was our family meal time, so I joined in. (Besides, in those days I didn’t let a little thing like lack of hunger keep me from eating!)

In general, our society expects people to eat at certain times. During international flights, food is served based on the time of day. When I flew from Boston to Europe, I was served a full dinner shortly after takeoff, and then “breakfast” four or five hours later. Did I need the food? No, especially as those few hours had been completely inactive. But with the time change, it’s morning, which means breakfast, so we get served.

Overseas trips also helped me realize that expected meal times vary by culture. Lunch o’ clock might be closer to 1 in Europe, dinner not until 7 or even 8. In some ways, adjusting to that was harder mentally than physically, to let an expected meal time go by without getting antsy or finding an excuse to eat.

These days, I’ve learned how to prepare better for scheduled eating times; I know how to modify the type and amount of food so I’ll be hungry the next time I’m planning to eat. This is especially useful on those trips to Europe, or for my book group potlucks when we don’t eat until after 7. I’m still not perfect but that’s what snacks are for!

It’s nice to know that when I eat is now mostly driven by my body’s needs, not by the clock.

PrevPreviousWhat is a Non-Diet Approach?
NextBook Review: Eat What You Love, Love What You Eat for Binge EatingNext