Don’t exercise to punish yourself for eating 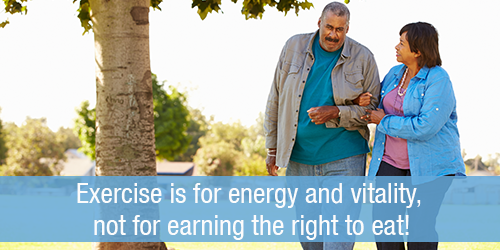 As a family physician, I often heard patients say, “I know I should exercise, but I hate it!” Clearly, the words should and hate signal a negative relationship with exercise, despite all the known health and psychological benefits. Where does this come from? One explanation is that people have learned to think of exercise as punishment for eating.

I first recognized this in my own thoughts about exercise: how many calories I was burning per session (or even per minute), and whether I was even coming close to that “indulgence” I had cheated on my diet with.

For the first time, I saw what this graphic in an article called “Can You Afford the Extras?” was really saying. It showed it takes 20 minutes of bike riding to burn off 200 calories of truffles and I realized the authors were equating eating a delicious (“bad”) food with the need to pay for it with exercise. (Sort of like a criminal has to pay for their crime by doing time in jail!)

First, that is fuzzy math. Second, it is another example of our culture’s negative approach to eating and exercise.

How to Turn Exercise into Punishment for Eating

You’ve probably seen this sort of thing so often you don’t stop to think about how absurd it is. And lest you think it is an outdated idea, I assure you there are plenty of examples out there, like this one, equating the 343 calories in a burger with 30 minutes of swimming.

Exercise is for health and vitality, not for punishing yourself for eating. And for that matter, exercise is not for earning the right to eat or for paying penance for eating something “bad.”

Besides, calorie counts on food and exercise are notoriously imprecise and subject to significant individual variability!

Not to mention how ridiculously time- and energy-consuming (read, wasting) it would be to calculate every calorie you eat and burn throughout the day. (Believe me; back in my diet days, I tried.)

To illustrate the stupidity of this kind of threatening approach to eating, just imagine if it were the other way around:

If you want to swim for 30 minutes, you have to eat a hamburger!

Then why would it makes sense the other way around?

Now contrast that with this short video about the power of making physical activity FUN!

Although it seems counter-intuitive in our diet- and weight-obsessed culture, at Am I Hungry? Mindful Eating Programs and Training, we recommend people separate exercise from calories and disassociate food and exercise. Food and physical activity independently impact our overall well-being, but they shouldn’t be turned into a complicated math problem!

Move your body a little and regularly because it makes it possible to move your body more and more easily! Exercise enables you to experience your life more fully and more vibrantly. Calories be damned!

Enjoyed this article? Here are three more to help you:

Change Your Thoughts about Exercise

Not getting enough exercise? Lower the Bar

Diet and Activity Trackers: The Next Generation of Misused Tools

28 thoughts on “Don’t exercise to punish yourself for eating”