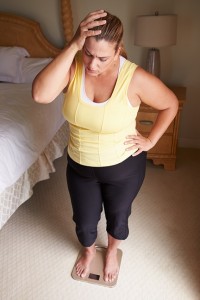 While the diagnostic criteria focus on the binge part of the cycle, many people don’t realize that Binge Eating Disorder and restrictive dieting often co-exist. And while it may seem that dieting is a result of binge eating, it may actually be the other way around for many people.

Dietary restraint (as it is often referred to in the research) can lead to hunger, deprivation, cravings, and frequent thoughts of food. When these overwhelm the dieter, overeating may result. Overeating is usually followed by guilt, then back to dieting to make up for it. We refer to this cycle as the eat-repent-repeat.

This process is often greatly magnified in the individual who struggles with binge eating (the binge-repent-repeat) cycle. While it is difficult to definitively say whether dieting causes or contributes to binge eating, they often go hand-in-hand. Nearly everyone I have met who struggles with binge eating describes restriction at some point in their eating disorder. As described in this excerpt from Eat What You Love, Love What You Eat for Binge Eating: A Mindful Eating Program for Healing Your Relationship with Food and Your Body:

When reality sets in after the binge, you may feel overcome with emotion and full of rage—wanting to throw, hit, or scream—or feel despondent, hopeless, or wishing you could die. The feelings of guilt and self-hatred lead to more negative self-talk and further isolation. This increases secrecy, shame, loneliness, and other emotions that perpetuate the cycle.

In the aftermath of a binge, there is usually a sense of desperation and a renewed dedication to the next diet. You make plans to be “good” again—the next day, “on Monday,” or “after the holidays.” Of course dieting doesn’t stop binge eating. For many people restrictive eating simply becomes part of the binge cycle.

Unfortunately, many people blame themselves when the diet fails and they binge again. (Read Stop Blaming Yourself! 5 Reasons Why Your Diet Doesn’t Work.) During this National Eating Disorders Awareness Week, if you recognize this pattern in yourself or someone you care about, I encourage you to take 3 minutes to get screened. Effective treatment is available!

(If you struggle with emotional eating or binge eating, click here to read about the Mindful Eating for Binge Eating Program.)