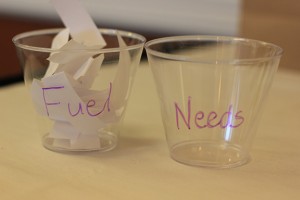 I asked if they would be willing to sit down with me and talk about their experiences. They all enthusiastically consented, saying that they hoped it would help other people who were struggling with binge eating disorder (BED) and bariatric surgery.

I learned that they were all at least two years out from their weight loss surgeries. They had had a variety of procedures: Roux-en-Y gastric bypass, gastric sleeve, and adjustable gastric band. One of them had a band that was later converted to a sleeve. They all had symptoms of binge eating disorder prior to their procedures; they had hoped that surgery would “fix” the problem but it hadn’t. That’s why they had come to the retreat. Let me first share some of the things they told me (anonymously but with their permission of course), then I’ll talk about my take-aways from working with them during the retreat.

“I was never diagnosed with Binge Eating Disorder prior to the surgery. But I had it.”

“I’ve always felt that I was missing something. Something must be wrong with me—was I missing willpower? I am very successful in my work though, so I figured there had to be another answer.”

“I’ve been on a diet my whole life and that never cured my binge eating! Having surgery was just another diet.”

“I’ve been going to the yearly follow-up but I’ve been gradually regaining weight.”

“My surgery team told me the surgery was only a tool but I didn’t want to listen. They kept saying ‘You have to make changes,’ but they don’t tell you how to make changes.”

“I took an Am I Hungry? Mindful Eating Workshop before surgery so my expectations were more realistic.”

“I’m glad I had the surgery; it allowed me to become more active, which I love. Now I need to deal with my binge eating disorder.”

“I had been going to support groups for two years but all they do is support you. They didn’t actually tell us how to heal our relationship with food.”

“The procedure was effective for weight loss, but now I am medical care-dependent.”

“Until I learned mindful eating, I still wasn’t free of my issues with food!”

“I don’t regret having the surgery. I had the lab work of a 70 year-old woman. I had a Lap Band in 2009. I lost 40 pounds on a diet so I could have the surgery, then I lost 100 pounds after surgery. I have regained 40 pounds so far, so I am here to finally address my binge eating.”

“I was told that if you eat too much too fast, the food will get stuck. That’s all I had learned about mindful eating until now.”

“Since my surgery, I eat to throw up.”

“I had the band. I could eat a Snickers bar, but not protein so I just stick to “slider” foods or “cheater” foods.”

“My mother had weight loss surgery too and only ate junk food afterward. That isn’t healthy either and I don’t want it to be like that.”

“I am seeing a therapist now.”

I loved working with all of these individuals! They were all obviously highly motivated to get better; after all, they had even had a surgical procedure to try to stop binge eating. Having already gone through bariatric surgery, they clearly understood that binge eating wasn’t going to be fixed by one more diet.

Most were glad they’d had bariatric surgery but were disappointed (even surprised) that it hadn’t stopped them from binge eating. As we explore in the Am I Hungry? Mindful Eating for Bariatric Surgery program, maladaptive eating is a common challenge for people after weight loss surgery and can lead to complications and weight regain.

Unfortunately, too many people (and health care professionals) think that the problem is weight and miss the diagnosis of BED, or prescribe the wrong treatment: weight loss. (Be sure to read this post too: What is the Association Between Weight and Binge Eating Disorder?) Ultimately, it is essential to resolve the underlying issues driving the binge eating.

During the retreat, these participants learned that it wasn’t about the food or about having enough willpower. They learned to tell the difference between meeting their needs for fuel and meeting their other needs. Together, we had many lovely mindful meals and mindful movement opportunities. I am happy to say that they are now on the right track toward healing their relationship with food and their body!