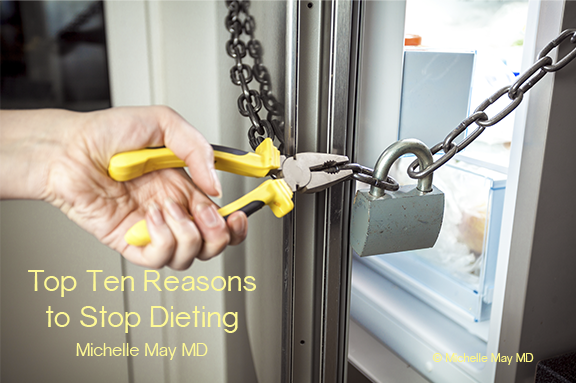 For seventeen years, I’ve been saying “diets don’t work” and gradually, the chorus has grown louder. But a recent study of The Biggest Loser contestants provides important new evidence about one of the many reasons that diets fail. Read on for my top ten reasons to stop dieting (and/or to stop recommending diets for your patients and clients).

A review published in the Journal of Obesity estimated that at best, only 20% of participants maintain weight loss at one year, and the percentage of those maintaining weight loss decreases further by the two-year follow up. The authors suggest that these statistics would be even worse if outcomes for participants who dropped out of the programs and those who had diagnosed comorbidities such as mood disorders or binge eating disorder had been included.[1]

2. You may gain more than you lost.

There is significant evidence that the restrictive, weight-focused approach is ineffective at producing sustainable changes in weight or health. In a review of 31 long term studies on dieting, Medicare’s Search for Effective Obesity Treatments: Diets Are Not the Answer, the authors conclude, “there is little support for the notion that diets lead to lasting weight loss or health benefits.” They found that the majority of individuals are unable to maintain weight loss over the long term and one-third to two-thirds of dieters regain more weight than they lost.[2]

There are coordinated metabolic, behavioral, neuroendocrine, and autonomic responses designed to maintain body fat stores at an ideal established by your central nervous system. This is called “adaptive thermogenesis” and results in weight regain in those attempting to sustain reduced body weights.[3] This metabolic adaptation to weight loss is associated with increased hunger sensations.[4]

5. Diets require an unsustainable amount of time and energy.

Restrictive eating behaviors require a significant, and for most people, unsustainable amount of time, energy, and willpower—already in short supply for most people. Some people manage to stick with the rules but develop a Restrictive Eating Cycle in the process. (Take the Eating Cycle Assessment here.) They have to become experts at ignoring hunger and/or depriving themselves of foods they love in order to stay in control. This is a significant price to pay since it takes a lot of energy to eat only so called good foods and avoid the “bad” ones. In the Restrictive Eating Cycle, eating leads to conflict and guilt, rather than pleasure and satisfaction that are essential for sustainable changes to one’s eating.

Studies have shown that food restriction actually results in counterproductive psychological consequences such as preoccupation with food and eating, distractibility, increased emotional responsiveness, dysphoria, increased eating in the absence of hunger, and bingeing.[6] Further, evidence from the eating disorder literature indicates an emphasis on weight control can promote eating disordered behaviors.[7]

7. Diets are an outside-in approach.

Diets are based on the latest external authority’s rules about when, what, and how much to eat. For example, many diets prescribe an allowed amount of food per day, forcing the dieter to ignore hunger in order to comply. Diets may prescribe eating at predetermined meal times, sometimes causing the dieter to eat even when they are not hungry. This teaches dieters to disregard their own internal authority and further disconnects them from their own body’s innate cues of hunger and satiety, moving them further from their ability to know what their body needs.[8]

Most diets are based on limiting various foods in one way or another. When certain foods are forbidden, their intrinsic value increases—as if they were on a pedestal, just out of reach. When these desirable foods are restricted, feelings of deprivation increase, potentially leading to stronger cravings. When one finally gives in to these powerful cravings, they feel guilty and out of control. They may give up the diet and even binge on the foods they’ve been missing. This constant struggle leads to an endless eat-repent-repeat cycle and a painful love-hate relationship with food. Of course, most dieters blame themselves when the diet fails, when in reality, the diet failed them.

Diets don’t really address the reasons why most people overeat in the first place. Although substituting celery sticks for potato chips may temporarily decrease calories, if the potato chips were eaten out of boredom, celery sticks won’t fill the bill either. Consequently, when the diet is over, the underlying triggers for eating haven’t changed so the previous eating habits resume.[9]

10. The focus on weight and weight loss may result in weight stigma.

Dieting in response to societal pressure to attain an idealized body shape or size and the prizing of the thin ideal perpetuates weight stigma—negative beliefs and attitudes toward people who do not meet an “acceptable” weight, size, or shape. Weight stigma is associated with diminished health and well-being in myriad ways, including increased caloric consumption, diminished exercise, binge eating behaviors, low self-esteem, depression, and decreased self-rated health.[10]

What to do instead?

Research has shown that size acceptance and learning to use hunger and fullness cues produces sustainable improvements in blood pressure, cholesterol levels, physical activity, self-esteem, and depression compared to dieting. There is a growing trans-disciplinary movement away from restrictive, weight-focused programs toward a non-diet, weight-neutral, mindfulness-based approach to optimal well-being.[11] Am I Hungry? Mindful Eating Programs are a gentle inside-out approach that guide individuals to increase awareness of their drivers for eating, tune into their body wisdom, and practice mindfulness skills.

Your turn! Have you stopped dieting? Why? What has happened as a result?

[1] Tylka, T., et al. (2014.) The Weight-Inclusive versus Weight-Normative Approach to Health: Evaluating the Evidence for Prioritizing Well-Being over Weight Loss. Journal of Obesity, 2014.

[8] A Non-Diet Approach to a Sustainable Healthy Lifestyle. Retrieved May 05, 2016 from Am I Hungry? Website: https://amihungry.com/pdf/Non-Diet-Approach-to-Sustainable-Healthy-Lifestyles.pdf

[9] May M: Eat What You Love, Love What You Eat: A Mindful Eating Program to Break Your Eat-Repent-Repeat Cycle. Am I Hungry? Publishing; 2013.

[10] Tylka, T., et al. (2014.) The Weight-Inclusive versus Weight-Normative Approach to Health: Evaluating the Evidence for Prioritizing Well-Being over Weight Loss. Journal of Obesity, 2014.

PrevPreviousSix Steps to Self-Acceptance
Next7 Am I Hungry? Mindful Eating Strategies that Help You “Eat Better”Next