Not getting enough exercise? Lower the Bar 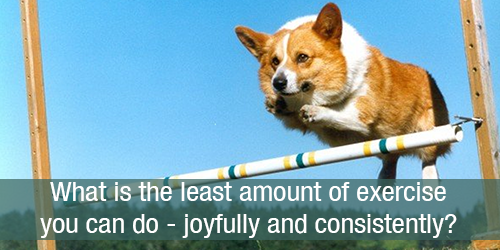 Why don’t you exercise?

Everyone has their own reasons for not exercising, even when they feel exercise is important and would be beneficial. This is sometimes called “exercise resistance.”

Notice I didn’t say, “What are your excuses for not exercising?” The word “excuses” is loaded with judgment. It implies that you’re lazy or lack the willpower necessary for overcoming exercise resistance.

In truth, we all have valid reasons for doing what we do. The key to changing our behavior is recognizing the underlying drivers so we can move toward what we want.

Let’s cover a few of the reasons we don’t exercise like we think we “should.” (Oops – there’s another judgmental word!)

For many of us, that show did even more damage to the image of exercise than being chosen last in grade school sports!

As a person who has grown to love hiking, yoga, and pickleball for the fun and positive benefits they offer, it was difficult to watch the aggressive regimens the contestants were forced to endure by the trainers. The contestants were often pushed to, and even over, their edge in the name of “entertainment.”

I worried about the effect it had on viewers who had been trying to talk themselves into starting an exercise program.

I guess the advice that’s usually given to beginning exercisers to “start slow and gradually work your way up” wouldn’t make for very compelling TV. Still, it’s difficult for me to imagine how these punishing two-hour first-time workouts would inspire you to start exercising—especially without someone to shame and scream at you on national television.

2. Trying to do physical activities you don’t enjoy

If you don’t like it, you probably won’t do it! It’s as simple as that.

Learn about your Exercise Personality to help you choose activities that are a better fit for your prefererences and lifestyle that you are more likely to enjoy—and do!

3. Doing too much, too fast

Current physical activity guidelines for Americans recommend at least 150 minutes of moderate-intensity aerobic activity (e.g., brisk walking) every week. That works out to be five 30-minute walks a week.

While this goal is comparatively modest, even that may sound discouraging if you aren’t physically active at all.

My advice if you’re having difficulty exercising? Lower the bar! 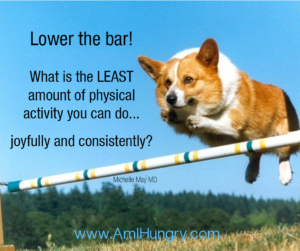 If you want to start an exercise program but feel discouraged, ask yourself:

“What is the least amount of exercise I can do… most days of the week, joyfully and consistently?”

Do the least amount of exercise?

Yes. Joyfully and consistently. Start where you are because when the discomfort and difficulty of making a change is too great, you won’t. Instead of focusing on the gap between where you are and where you “should” be, lower the bar so low that the temptation to step right over it is irresistible!

Your negative self-talk might say, “That’s not enough! It won’t make any difference.” But if it helps you take that first step toward a more active lifestyle, you will be well on your way!

How to Stop Using Exercise as Punishment for Eating

Diet and Activity Trackers: The Next Generation of Misused Tools