Do I Have Binge Eating Disorder?

With the addition of Binge Eating Disorder to the DSM 5[1], you may wonder, “Do I have binge eating disorder?”

Binge Eating Disorder (BED)  is the most common eating disorder. An estimated 3.5% of women and 2% of men in the U.S. have binge eating disorder. The incidence is considerably higher among individuals seeking weight loss. However, restrictive dieting and weight stigma tend to propel the Binge Eating Cycle and compound the problem. 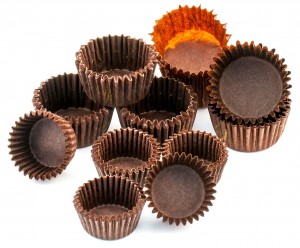 What is a binge?

Binge eating episodes are characterized by three or more of the following symptoms:

What is Binge Eating Disorder?

Here are the requirements for a formal diagnosis of binge eating disorder from the current Diagnostic and Statistical Manual (DSM5):

Summary of the Diagnostic Criteria for Binge Eating Disorder (BED)[1]

1. Recurrent episodes of binge eating characterized by both:

2. Binge eating is associated with at least three of the following:

4. Binge eating occurs at least once a week for three months on average.

5. You do not typically compensate for bingeing inapporpriately (by vomiting for example) and you do not binge only during the course of bulimia nervosa or anorexia nervosa. 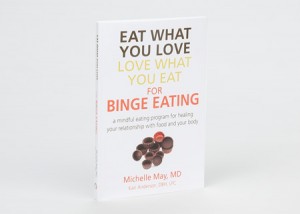 Kari Anderson, a Phoenix-based eating disorder specialist, co-author of Eat What You Love, Love What You Eat for Binge Eating, and co-creator of the Am I Hungry? Mindful Eating for Binge Eating Program, explains that a person with BED may eat “normally” with others, stop on the way home to buy “binge” foods, then binge and hide evidence of the episode. The aftermath of a binge episode involves extreme feelings of shame and disgust.

Kari adds, “Individuals with BED are typically competent and accomplished in other areas of their life, yet feel unable to stop this secret behavior. Bingeing is a way to escape or disconnect from feelings that seem intolerable. There may be difficulty managing states of emotional and physical distress without using food. On the other hand, the thought of giving up the behavior evokes anxiety.” People with binge eating disorder may suffer for years, trying numerous diets, feeling alone, ashamed, and depressed. You are not alone; there are millions of people with BED.

While most people can relate to overeating or even bingeing from time to time, the lives of those with binge eating disorder are significantly disrupted by the binges and the aftermath. They may suffer in silence for years – trying and failing numerous diets, feeling alone, ashamed, and depressed. But they are not alone; there are millions of people with BED.

How is BED treated?

If you think you may have binge eating disorder, seek treatment from an experienced treatment specialist. A great resource about BED for individuals and health care professionals is the Binge Eating Disorder Association (BEDA).

Mindfulness based strategies aimed at self-regulating emotional and physical states have shown promise in the treatment of Binge Eating Disorder. Mindful eating strategies such as those described in Eat What You Love, Love What You Eat for Binge Eating are an important complement to therapy.

With effective treatment, there is hope for recovery and the freedom to live the vibrant life you crave.

PrevPreviousSix Surprisingly Small New Year’s Resolutions that Lead to Big Changes
NextSeven Gifts for the Love of Your Life: YOU!Next