Diet culture: An outdated paradigm whose time is up! 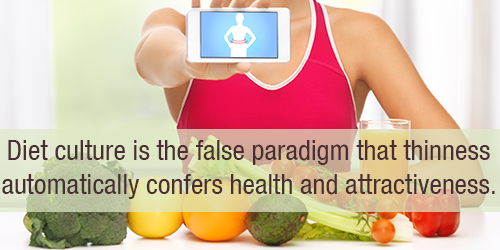 Although diets have been around for centuries, studies have shown that very few people experience sustainable changes in their health or weight. Worse, dieting is associated with weight cycling, disordered eating, eating disorders, and weight stigma. In short, diet culture is an outdated paradigm whose time is up! (Download references.)

When I was in medical school a few decades ago(!), peptic ulcer disease (PUD) was believed to be caused by stress and excess stomach acid. Therefore, the treatment was a bland diet and antacids, which didn’t work very well. Later powerful acid blockers were developed. These treatments worked better, but the ulcers frequently relapsed and required repeated or chronic treatment. 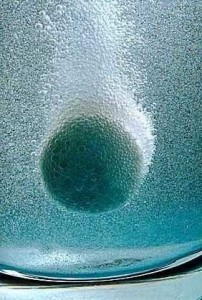 Despite these ultimately ineffective therapies, the discovery by Barry Marshall and Robin Warren that most cases of PUD were caused by a bacterial infection was initially met with great skepticism, defensiveness and criticism. They continued to challenge the dogma, even going so far as to intentionally infect themselves with H. pylori. It was well over a decade before it was widely accepted that PUD could be cured with a single round of triple therapy.

Aha! No wonder the old PUD treatment didn’t work: We were treating the symptoms, not the cause.

Marshall and Warren won a Nobel Prize in 2005 for their persistence in changing the paradigm, and millions of PUD sufferers have finally been cured!

We’re at a similar crossroads with dieting, the antacids of our day.

Like using antacids for peptic ulcer disease, diets temporarily treat symptoms, not causes. Diets temporarily change behaviors, not the source of those behaviors. And the restrictive rules that are part of every diet (see Signs your “eating plan” is really a diet below) drive the very behaviors they claim to fix!

As a result, the failure of diets reinforces false narratives about body size, willpower, and “good food/bad food.”

What is diet culture?

The diet paradigm, also called diet culture, is the pervasive set of beliefs that thinness automatically confers health, attractiveness, and well-being. Diet culture also implies that being (or becoming) thin is simply a matter of choosing “good” foods over “bad” foods (despite constantly changing definitions of good and bad foods). There’s also an emphasis on doing the “right” amount and type of exercise to achieve the highly oversimplified “calories in vs. calories out” equation.

In diet culture, conversations about miracle foods, cheating, and punishing exercise are commonplace and encouraged. Body-bashing has become a bonding experience for many.

Diet culture is so ubiquitous that many of my clients suffer from guilt about eating and physical activity even when they are not actively dieting. Ironically, these restrictive and shaming thoughts drive mindless and emotional eating, reinforcing diet culture’s belief that some people just have more self-control than others.

A paradigm that’s too flawed to fix

“When ideas go unexamined and unchallenged for a long enough time, they become mythological and very, very powerful. They create conformity. They intimidate.” – E.L. Doctorow

The diet and weight-based paradigms are flawed, yet so pervasive that millions of people are trapped in outdated beliefs about diets and ineffective restrictive behaviors, despite all the evidence that they are not moving the majority toward healthier, happier, more vibrant lives.

There’s endless, tiresome debate in the medical literature and media about which diet works better, but none have shown lasting results.

Often “experts” resort to blaming and shaming dieters when they quit the diet or weight cycle, even though that is the known outcome for the vast majority of people. There is talk about “non-compliance” and lack of willpower, despite the fact that many of the people I work with have accomplished many wonderful things in their lives.

The shift away from diet culture

I’ve seen many hopeful signs that a shift is finally taking place. More of my health and wellness professional colleagues are now helping their patients and clients learn mindful eating skills rather than teaching restrictive rule-following and preaching willpower and motivation.

And the murmur, “diets don’t work,” is growing louder. But the shift out of diet culture is much too slow as millions of people continue to waste time, energy, money, and hope on a paradigm that is too flawed to fix.

It is difficult for “experts” caught up in the diet paradigm to see the need for a radical shift, particularly if their reputation, life’s work, and in some cases, financial security depend on keeping people trapped in the eat-repent-repeat cycle. I doubt most people who promote various forms of dieting are malicious. It’s just that restrictive eating is so deeply embedded in our cultural norms, they can’t (or won’t) see the harm it is causing.

Signs your “eating plan” is really a diet

Be aware! In an effort to catch the rising anti-diet tide, many diets now claim they are “not a diet.” But to the trained eye, they clearly are. Just saying so doesn’t make it so, and therefore the results will be the same.

And increasingly, diet culture claims to be about wellness but nothing has really changed (“the wellness diet”).

Below are some of the telltale signs that a plan, program, or “lifestyle change” is actually a diet, even if it says it’s not.

(Note: If you feel skeptical, defensive, or critical as you read this list, take note! Your paradigm is showing.)

In short, diets fail because they exert external control on what was once a natural, internal process. (Think of the way a baby eats.)

The outdated and ineffective diet paradigm is a result of dichotomous thinking that presumes that if we don’t control behavior, we will be out of control.

But there is a third radical option: People can relearn to be in charge instead.

I’ve been speaking and writing about a non-restrictive, non-diet approach since 1999 when I founded Am I Hungry? Mindful Eating Programs and Training. In my book series, Eat What You Love, Love What You Eat, I guide readers through this paradigm shift one step at a time.

I’m the first to admit that although the concepts are simple, it’s not always easy to change longstanding beliefs. Paradigms are notoriously difficult to see through, much less break through. Yet countless mindful eating program participants and readers have changed the way they think about eating—even after decades of recurrent or chronic yo-yo dieting.

What’s the alternative? Argue for an outdated paradigm that obviously doesn’t work? Just continue to treat the symptoms? I’ve moved on. How about you?

Mindful Eating with Health Issues: What If I Can’t Eat What I Love?

What is the difference between Am I Hungry? and intuitive eating or HAES?