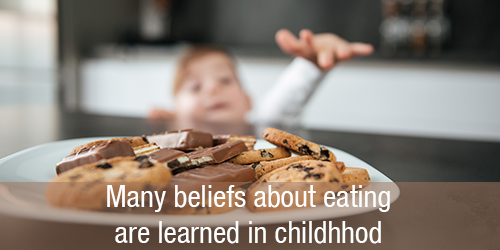 We all hold beliefs about eating that are so deeply embedded that we don’t question—or even recognize—them! Even when they are invisible to you, unexamined beliefs may be driving your eating decisions, producing results you don’t like or don’t understand. 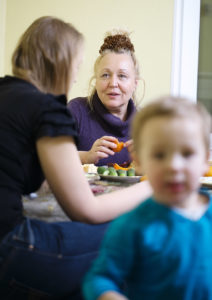 These unconscious beliefs may have developed from messages you were given directly or indirectly, intentionally or unintentionally from your family, friends, the media, and others. Sometimes they are cultural norms so it never occurs to you to question them (That’s just the way it is). Other beliefs are based on lessons we learned from old experiences that may not apply anymore. (Have you heard the story about the ham? I’ve shared it here…)

Once we have internalized these beliefs about eating, they are more difficult to recognize or change. In our Mindful Eating for Binge Eating Program, we call these “invisible walls.”)

If you ever struggle with inexplicable cravings or overeating that doesn’t make sense to you, you may have a belief about eating to explore!

My belief about eating: I won’t get my share!

I had an experience that revealed one of my old beliefs about eating: I won’t get my share!

We were staying at my parents’ cabin and my daughter got an almost empty bag of Fritos® out of their cabinet for a snack. I immediately wanted some, though I recognized I wasn’t hungry. 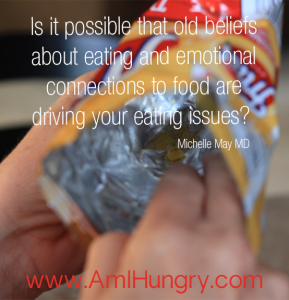 Oh. Right! I briefly reflected on what just happened…

I love Fritos, but we don’t keep them around very often. It’s not about restriction or fear of bingeing on them anymore; it’s simply a conscious personal decision to have them with a deli sandwich or at a social event (when I want them), rather than having them around all the time.

Interestingly, although I never feel deprived of Fritos, seeing them was still an environmental trigger. However, knowing they were almost gone felt like an emotional trigger! Why?

I remembered that when I was a kid, my active younger brother would sometimes finish off our favorite snack foods before I had a chance to have any. As a result, I would often overeat these foods out of fear that I wouldn’t get my share. Later, when I began dieting, Fritos weren’t allowed. That deprivation further reinforced my scarcity fears.

I share this story with you as an example of the power of mindfulness. Awareness of my physical sensations, thoughts, and feelings in the present moment allowed me to recognize that old beliefs were influencing my current thoughts, feelings, and behaviors. I simply needed to remind myself that food is not scarce. I can buy—and eat—Fritos whenever I want so there is no need to eat them just because my daughter wanted them!

Mindful eating teaches us to pause and become curious about our physical sensations, thoughts, and feelings, giving us a way to become conscious about our underlying beliefs about eating. (For more about how thoughts become beliefs and habits, check out this short article: Rewire Your Brain.)

Here are a few examples of unexamined beliefs about eating that may be driving unwanted behaviors. (Please share yours here.)

When I’m really hungry, I need more food than usual.

After all, although your blood sugar might be low, your stomach capacity doesn’t change. If you eat extra food, you’ll go from being too hungry to too full—from one extreme of uncomfortable to the other.

Rewire your brain: When you’re really hungry, you may want to eat your carbs first—fruit, starchy vegetables, bread—since carbs are digested quickly and will bring your blood sugar up. Eat as slowly as possible, giving your head time to catch up to your stomach.

This cultural convention has numerous implications: You might eat dessert whenever it is served, whether you are hungry or not. You might feel you have to eat all of your dinner first to earn the right to eat it – causing you to feel too full after. When you are already full, you won’t enjoy it as much.

Rewire your brain: If you really want dessert, you might decide to take a few bites of it near the beginning of the meal when your taste buds are still sensitive. That way, if you feel full at the end of your meal, you won’t feel like you missed out if you don’t eat the rest. You can also follow my grandmother’s advice to “Save room for dessert!” Another great strategy is to take your dessert with you. This may not work with chocolate mousse, but many desserts can be saved for later when you are hungry again so carry a small baggie with you.

If I’m a little bit hungry, I should eat a meal.

If you are only a little bit hungry, you only need a little bit of food. If you eat a full meal, you are likely to feel uncomfortably full when you are done.

Rewire your brain: Either wait a while until you become hungry enough for a meal or have a small snack instead.

I must clean my plate. I shouldn’t waste food.

These outdated common beliefs about eating likely developed generations ago when food was scarce. These messages need to be modified for our abundant food-environment.

Rewire your brain: Instead of cleaning your plate because there are starving children in _______, the best way to avoid wasting food is to take less. Even better: Donate the money you save to actually feed the children in ________.

It is not rude to eat according to your body’s needs.

Rewire your brain: It is acceptable to decline food you don’t need so do it politely and firmly. If they continue to insist, remember that it’s rude to try to make people feel guilty for refusing food they don’t want or need. Decline again, politely and firmly, and move away from the situation.

These sneaky beliefs about food drive you to eat out of fear of scarcity. Examples include: I might be hungry later if I don’t eat now, or I won’t get to have this food later so I should eat it all now. Scarcity beliefs might stem from inconsistent feeding in childhood, a lack of money or food at any point in your life, a challenging schedule, lack of preparation, or past dieting that left you with cravings or feeling hungry when you weren’t supposed to eat.

Rewire your brain: Ask yourself whether it’s really true that can’t eat later, or that you will run out of food. Most of the time, preventive eating is unnecessary and uncomfortable. Can you take food with you? Can you come back to this restaurant? Can you ask for the recipe? Can you make this food again? Is it worth feeling uncomfortable now out of fear of being uncomfortable later?

Your turn: What are your beliefs about eating?

Next time you don’t like how an episode of eating turns out, pause to ask yourself if there was an unexamined belief driving your decisions. Please take a moment to read Why do you cut then ends off the ham? and while you’re there, share a belief you have about food that you’d like to change!

How to overcome a fear of hunger

PrevPreviousWeight Stigma in Healthcare: When you know better, do better
NextDiet culture: An outdated paradigm whose time is up!Next