Are you gambling with your well-being? 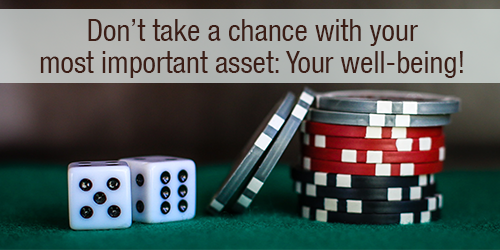 I once saw a newspaper article about the lack of scientific evidence for a new weight loss “miracle.” Right below the article was a large ad for a local doctor prescribing the stuff. I suspected he’d probably demand a refund of his costly advertising dollars, but I seriously doubt the article significantly decreased the response rate to his ad.

Going on a diet is like playing a game of chance

Somehow, when there’s a possibility of a payoff, no matter how remote, some people will take the chance. But going on another diet is kind of like gambling:

You know it’s too good to be true but somebody has to win, right?  Wrong.

Gambling with your well-being

I remember meeting a woman at a dinner party who looked kind of “flat.” I noticed she wasn’t eating. She explained that she was sick of yo-yo dieting and was now on a program of hormone shots and 500 calories a day to “reset her pituitary gland.”

Apparently, this scientific-sounding explanation and her own desperation caused her to overlook the absurdity of temporarily starving herself to try to attain permanent results. And she admitted this was not the first time she’d been taken in by drastic measures – and I was afraid it wouldn’t be the last.

But think about it… if it actually did what it claimed, wouldn’t the market be shrinking?

People are lured in by images of happy models and promises of a quick fix for all their problems. Somehow the cost doesn’t seem so high when the potential benefits look so great.

This is akin to someone in financial trouble heading to Vegas with their last thousand dollars. They don’t pause long enough to wonder, “How could they keep all these lights on if everyone actually won?” Somehow they manage to ignore their gut instincts telling them that it’s too good to be true.

Even people who don’t usually gamble might plunk down a few bucks every week to buy a lottery ticket. Advertisements convince them that “you can’t win if you don’t play.”

They get hooked on the small payoffs and ignore the fact that very few people actually hit the jackpot. And most who do eventually end up right back where they started, or worse.

In fact, the most common outcome of dieting is weight-cycling! To make matters worse, dieting also increases the risk of disordered eating, eating disorders, and weight stigma.

Don’t bet on it 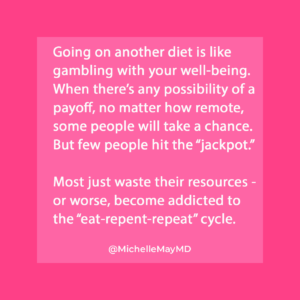 Other than a few quarters in a slot machine for entertainment value, the lure of gambling has eluded me.

Yet I was once willing to play the weekly diet weigh-in game until I realized that weighing, measuring, and counting my food was causing preoccupation, deprivation, cravings, and overeating (not to mention the real cost in money, time, and energy!)

Just like gambling to get rich, the “solution” had become part of the problem. I could fool myself into believing that “this was the last time,” but it never was. I finally admitted that I had become addicted to the eat-repent-repeat cycle.

If I wasn’t willing to gamble my money, why was I gambling with my well-being?

I went cold turkey: No more dieting! Instead, I made a true investment in my well-being—body, mind, heart, and spirit—with mindful eating. I expected it to be harder, but it wasn’t because the wins were immediate, real, and lasting.

I discovered the real win

By giving up dieting and learning to manage my eating and my life mindfully, I discovered the real wins:

If you suspect you might be trapped in the addictive eat-repent-repeat cycle, take our quiz to find out. Write down your scores and download the report.

If you’ve already read Eat What You Love, Love What You Eat: A Mindful Eating Program to Break Your Eat-Repent-Repeat Cycle or participated in an Am I Hungry? Workshop, take the quiz  again to see how your investment has paid off!

Enjoyed this article? Here are three more to help you:

Diet culture: An outdated paradigm whose time is up!